DYNAMIC ARCHITECTURE – A NEW TREND IN THE MODERN WORLD

Dynamic buildings are a new stage in the development of architectural art, a kind of philosophy that changes our view of the appearance of cities.

The word ‘dynamic’ itself indicates movement in architecture. To make a building move, architects use what is known as ‘stringing’ the floors independently from each other from the bottom up onto a solid foundation. Between them are blades, through which the wind blows and sets the floors in motion and generates energy. Thus, the façade of the building does not have a clear architecture – it constantly takes on different shapes.

The uniqueness of dynamic projects

Dynamic architecture, as a technology for the rapid construction of buildings directly on the site, has its distinctive advantages, thanks to which this type of construction has received worldwide recognition and approval.
In such a project it is important to use heavy-duty materials – metal columns and monolithic slab are ideal for the frame. They are not only very durable and easy to build, but also not too expensive.
90% of the building are rotating modules, that are produced in the factory. Cranes and other machinery will only be required by workers when constructing the central core of the building, around which the floors will rotate.

Then this core itself will act as the freight elevator rails, along which the triangular sections with rooms can be lifted upwards. The living section is pulled up, after which the entire assembled structure is shifted by one element counterclockwise. A new room is inserted in the vacant space, and so one floor is filled. 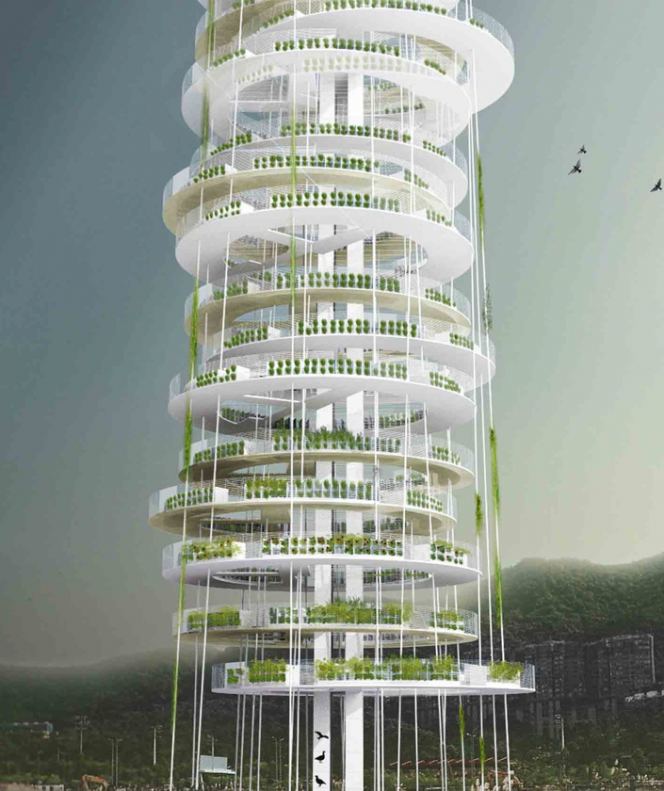 It is planned that this building will house offices, a hotel and private apartments. On the upper floors it is planned to equip a parking lot for cars that will be delivered there by special hoists. A penthouse with a swimming pool and a garden will be placed on the roof. Owners of apartments on the top five floors will be able to independently control the direction and speed of rotation of their floor using a voice control system.

Thus, the following advantages of dynamic projects can be mentioned.

Firstly, a reduction in construction time. In the conventional system it takes about three weeks to construct one floor of a building. A moving structure, on the other hand, can be assembled in just 3 days (we are talking about one floor here!) according to experts in the field of dynamic architecture. The construction of the entire structure will be reduced to 18 months – construction under the standard program takes about 30 months!

One of the known disadvantages of dynamic projects today is the issue of motion sickness of occupants while the floors are rotating. Therefore, before buying an apartment in one of the dynamic buildings, it is worth checking whether you have diseases related to the vestibular apparatus.

The Dynamic Tower is undoubtedly a masterpiece of modern architecture. The author of this project is David Fisher, a renowned architect from Italy, head of Infinity design in Florence.
He became popular in the 80s, becoming famous for his innovative approach to creating hotels, restoring architectural monuments and designing public buildings. Projects of this architect have been implemented in Dubai, Paris, Hong Kong and London.

David Fisher always based on 2 concepts: a production approach using a large number of prefabricated elements and a dynamic architecture.
The first Dynamic Tower project was presented in June 2008. Since then, the design has already been developed for 5 rotating skyscrapers: for London, the United Arab Emirates, Paris, New York and Moscow.
The first tower is planned to be built in Dubai. Its cost will be approximately $ 700 million. It will have a height of 80 floors and will be 420 meters. The cost of one apartment ranges from 4 to 36 million dollars.
At a conference in New York, David Fisher said, “It’s the first building in the world that’s spinning, moving, and changing its look in every possible way. It will never look the same”.
Each floor will rotate around its axis 360 degrees by voice command. The entire floor will make a full circle from 1 to 3 hours.
The project envisages that the building will be powered by its own energy using horizontal wind turbines that will rotate between all the floors to generate electricity. Solar energy will be supplied by photovoltaic cells placed on the top of each of the rotating floors, 15% of the surface of which will be exposed to sunlight at any given time. Rotating, the tower will be able to generate its own energy through solar panels on the roof and 48 wind turbines.